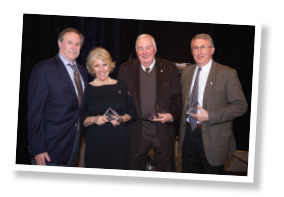 One of Mr. Andrejeski’s proudest achievements was increasing the pipeline of rheumatology trainees, which had dipped in the ’90s. Young physicians did not want to practice in a field that had few therapies available to help their patients.

“Biologics changed all that. All of a sudden, rheumatologists became the leaders in biological therapy. We had more interest from trainees,” he says. “Our leaders at the time had the wisdom to go to industry and say, ‘There is a dearth of rheumatologists. If you want your therapies to be utilized to help the most patients, you’ll need more rheumatologists.’” The Foundation funded its first rheumatology fellowships in 2002, and in 2019, there will be close to 250 rheumatology trainees starting fellowships.

Mr. Andrejeski also cites the launch of the Rheumatology Informatics System for Effectiveness (RISE) registry as a source of pride (see “The RISE Registry,” p. 27). “Rheumatologists need to record and measure what is going on with patient progress. That’s a message I want to send: Measure, measure, measure. RISE hasn’t yet scratched the surface of its possibilities, but it is a powerful tool. A rheumatologist and friend, Antony Rosen, MD, from John Hopkins once said to me, ‘Man, as a species, loves tools.’ We have to figure out how to benefit the most from this incredible tool.”

One of Mr. Andrejeski’s longtime staff members, Ron Olejko, retired last year after working for the ACR for more than 40 years—since 1975. He remembers the concern many had that the new association wouldn’t survive. Instead, it thrived under Mr. Andrejeski’s watch.

“Due to Mark’s financial acumen, the ACR is now financially stable and a major supporter of rheumatology research. Among Mark’s many talents is his ability to hire the best people for the job and then allow them the freedom to excel in those jobs,” says Mr. Olejko. But the Ohio native and Cleveland Browns fan adds, “Mark does have one major flaw: He’s a Steelers fan.”

What will Mr. Andrejeski do in retirement? He has no idea.

“I’m looking forward to finding out. I just want to figure it out as it happens. I’ve traveled to so many great places while I have worked here, so I don’t even know if travel is that high on my list,” he says. “I’m going to try to get back into my golf game. That’s one of the reasons I wanted to move here to Atlanta. The weather allows you to play golf so much of the year.”

Why retire now? It’s the right time,
he says.

“People always say, ‘If you look at yourself in the mirror and say, ‘It’s time to retire,’ you know it’s time. You just know.”