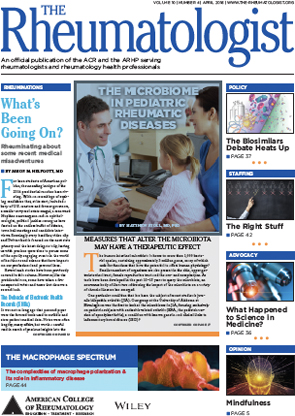 I read with interest the Diagnostic View (TR, April), which, according to the authors, represented a case of rhupus, an overlap syndrome of RA and SLE. I challenge this view.

My arguments: In the case of erosive RA, typically erosive changes are seen at MTP joints other than MTP1 (e.g., MTP5). In addition, the erosive changes seen at the MTP1s look weird. On the left side, the first metatarsal is shortened and the proximal phalanx looks like a Mexican cap. Maybe a case of RA-SLE-psoriatic arthritis? Post-surgery? Is there an associated gout? We were not told the level of uric acid.

The authors reply: Thank you for showing interest in our submission. We agree that erosive changes are seen at joints other than the first MTP, and this patient does, in fact, have an erosion seen on the fifth MTP of the right foot, as well as at the second and third MTPs of the left foot.

You are correct in that the erosive changes of the first MTP are possibly related to post-biopsy changes from a bone biopsy of that digit in 2004. The pathology at that time was consistent with osteomyelitis of the area, and she was treated with IV nafcillin. She has not had any surgical intervention to the second or third MTP of her other digits where erosions are present. She has not had a uric acid level checked; however, she is a woman in her 30s with preserved renal function and, therefore, low suspicion for gout.