You are here: Home / Articles / Prednisone Might be the Missing Ingredient in the American College of Rheumatology’s Recommendations for Treating Patients with Rheumatoid Arthritis
Print-Friendly Version / Save PDF 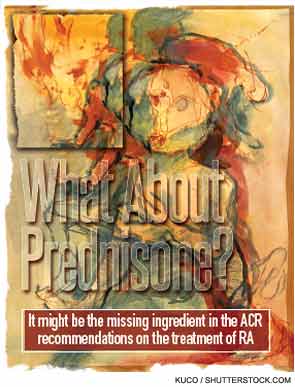 Editor’s note: The ACR recently released a call for possible partners for a new RA guideline development effort beginning this year. The new guidelines would include DMARDs, steroids, and biologics, including newer oral agents. Look for more information on these efforts in the May issue of The Rheumatologist.

Enthusiasm for the new often results in overlooking the continuing, or even developing, advantages of the familiar. Thus, in our enthusiasm to embrace new treatment options, we may fail to notice that existing therapies, used in appropriate ways, offer more than we first thought.

The pharmaceutical industry is locked into a commercial system that demands the development and promotion of new agents to maintain patent rights and continuing income generation, and has no interest in the intelligent use of existing agents. Rheumatologists, on the other hand, are looking for the best treatment options independently of commercial considerations. Remember the story of methotrexate? In the 1950s, it was used in anticancer therapy and in patients with severe psoriasis. It was noticed that, in some patients, their psoriatic arthritis improved, and in a landmark paper from the Royal National Hospital for Rheumatic Diseases in Bath, Kersley reported the first series of 10 patients successfully treated for psoriatic arthritis.1 It was not long before methotrexate was taken up for rheumatoid arthritis (RA) as well, and in a series of substantial and important randomized controlled trials, led principally from North America, the rheumatology community established its clear success as a disease-modifying agent.

Finding the best way to use glucocorticoids in the treatment of RA is another example of clinical persistence in the face of commercial neglect. In their seminal report announcing the therapeutic use of glucocorticoids for the first time, Hench, Kendall, Slocumb, and Polley recalled that it was 1929 when Hench first noted the beneficial effects of pregnancy and jaundice on RA.2 It was this observation that started the hunt for an underlying agent, but it was not until 1948 that a sufficient amount was available to test it in a patient with RA. The symptomatic benefit was astounding.2,3

The efficacy of glucocorticoids in treating inflammation was established early, but enthusiastic overtreatment also led to some early serious adverse effects and the pharmaceutical industry turned to the development of nonsteroidal antiinflammatory drugs. While glucocorticoids are widely used, particularly in the U.S., their use was, paradoxically, widely condemned.4