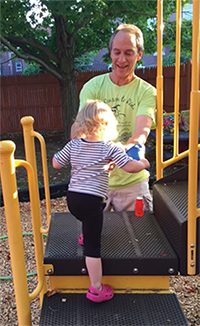 On Thursday nights, Dr. Shmerling plays with children at Second Step while their mothers attend counseling sessions or other facility programs.

On any Thursday from 7 p.m. to 8 p.m., you can find Robert H. Shmerling, MD, playing tag, basketball or even roughhousing with a group of children at Second Step, a transitional living program that offers victims of domestic violence in the Boston area a safe place to live and opportunities to go back to school or find a job.

Dr. Shmerling, clinical chief of the division of rheumatology and program director of the rheumatology fellowship at Beth Israel Deaconess Medical Center in Boston, has rarely missed a play date since he began volunteering at the facility nearly eight years ago. As one of the few male role models at the facility, he says the weekly experience positively affects children of all ages and has made him more sensitive to his patients’ overall problems.

Dr. Shmerling graduated from Harvard Medical School in 1983. Three years later, he completed his residency at Beth Israel Hospital, now known as Beth Israel Deaconess Medical Center. He continued on with his medical studies by pursuing two fellowships—one in rheumatology at Brigham and Women’s Hospital and another in primary care fellowship at Beth Israel Hospital between 1986 and 1989. He became familiar with Second Step when Lisa, his wife of 31 years, and Alison, his now 27-year-old daughter, began volunteering at the facility more than a decade ago. Although Lisa has since moved on to other volunteer opportunities, and Alison resigned her volunteer position after moving away to college, Dr. Shmerling continues to volunteer at Second Step.

Dr. Shmerling vividly remembers his first day. “I didn’t know any of the kids or staff or volunteers besides my wife,” he says, adding that there’s no task more daunting than finding ways to entertain a group of energetic children. “It was a little intimidating, because you have to earn the kids’ trust to really be accepted and spend quality time with them.”

On Thursday nights, Dr. Shmerling and three or so other volunteers play with up to eight children while their mothers attend facility programs, counseling sessions, yoga or Zumba classes. It’s hard to say who has more fun—the kids or Dr. Shmerling. He enjoys playing tag, soccer or lacrosse with the kids, shooting hoops and pushing them on swings or bicycles with training wheels. Sometimes, it’s the smallest of gestures that produce the biggest smiles. He points to one small boy who barely spoke a word of English who enjoyed touching the large blue globe that hangs from the ceiling in the facility’s playroom.