TINU syndrome has an excellent prognosis. It has been sporadically documented in case reports in various ophthalmology and nephrology journals. It mostly occurs in adolescents and young females, with a median age of onset of 15 years.2 Much of the underlying pathophysiology remains unclear; however, T lymphocytes have been reported to play a significant role in this syndrome.3 Certain associations have been documented, but in most cases, no risk factors are identifiable.4

We report a case of TINU syndrome in which the patient initially presented with hand synovitis before the development of oculo-renal disease.

A 29-year-old Caucasian woman with a past medical history of iron-deficiency anemia presented to our rheumatology clinic in November 2016 for evaluation of bilateral hand pain and swelling of one-year duration, associated with one hour of morning stiffness.

She presented to a new ophthalmologist and was found to have bilateral, non-granulomatous anterior uveitis. Her topical steroid frequency was increased to six times daily, but she continued to have low-grade uveitis. She was switched to a higher potency steroid drop (difluprednate 0.05%), with a good response.

Urinalysis demonstrated 11–30 WBC/hpf, 11–30 RBC/hpf and elevated urine beta-2 micoglobulin at 1140 µg/L (reference range: 0–300 µg/L). Urine cultures were negative for growth. The rest of her laboratory test results were unremarkable, other than mildly elevated CRP, as shown in Table 1. A chest X-ray was normal.

At this point, we suspected TINU syndrome, given her chronic bilateral anterior uveitis and abnormal urine findings.

A percutaneous renal biopsy was peformed and revealed acute tubulointerstitial nephritis in the absence of immunoglobulin or complement deposits on immunofluorescence (see Figures 1–4). The patient was subsequently started on prednisone at a dose of 40 mg/day (1 mg/kg/day) for a presumptive diagnosis of TINU syndrome.

On one month follow-up, she reported resolution of her hand pain and swelling, and her rheumatologic exam was normal, with no evidence of synovitis. Repeat urinalysis at that point was normal. Steroid eye drops were slowly tapered down over a three-month period, and her uveitis remained quiet off of eyedrops. Repeat urine beta-2 microglobulin measurement after four months was normal at 298 µg/L (reference range: 0–300 µg/L). 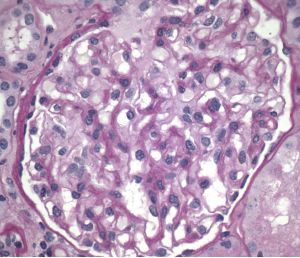 TINU syndrome, which usually occurs in young females, is a rare condition defined by the combination of tubulointerstitial nephritis and bilateral uveitis. This disease was first described more than 40 years ago, but its underlying mechanisms remain poorly understood.

Limited evidence suggests that a common autoantigen to both the uvea and renal tubular cells (modified C-reactive protein) plays a pivotal role in its pathogenesis.5 Additionally, delayed-type hypersensitivity, with an interleukin-2 mediated proliferation and activation of T lymphocytes, has also been reported.3 Although certain risk factors, such as infection and medications, have been implicated in the onset of TINU syndrome, most often, no cause is identifiable (as in this case).4,6 Other diagnoses, such as sarcoidosis, systemic lupus erythematusos (SLE), Sjögren’s and spondylo­arthropathies, should be considered and ruled out prior to diagnosing TINU syndrome.

Our patient had a positive ANA test, but negative SS-A, SS-B, anti-Smith, anti-DsDNA and anti-RNP antibodies. RF, anti-CCP and HLA-B27 were negative. Her angiotensin-converting enzyme level was normal. She also had a normal chest X-ray. Additionally, her renal biopsy was consistent with acute interstitial nephritis with no other pathological findings suggestive of SLE or sarcoidosis. After we excluded other possible diagnoses, the constellation of bilateral anterior uveitis, acute interstitial nephritis and markedly elevated urinary β2 microglobulin level confirmed the diagnosis of TINU syndrome in our patient.7,9

Although not present in our patient, in some cases of TINU, kidney involvement may present as acute renal failure with proteinuria and glycosuria.8

Our case demonstrates an uncommon presentation in which ocular involvement preceded renal disease. A majority of TINU patients develop uveitis after a biopsy-proved diagnosis of tubulointerstitial nephritis.4 This case is unique because our patient presented with bilateral symmetrical synovitis of her PIP and DIP joints, which occurred about six months before the onset of ocular symptoms and more than one year before the diagnosis of interstitial nephritis.

Although TINU may be associated with systemic findings, such as fever, weight loss and fatigue, synovitis is not a well-documented finding in this syndrome.9 This raises a question regarding whether common autoantigens (known to both the uveal and renal tubular cells) play a role in joint synovial tissue.

We found only one other case report that described the onset of bilateral synovitis, in that case in the knees of a 16-year-old Turkish male with prior diagnosis of TINU.10

Ambreesh Chawla, MD, is a third-year postgraduate internal medicine resident at Saint Barnabas Medical Center, Livingston, N.J. With a background in biomedical engineering, Dr. Chawla’s primary goal is to complete a rheumatology fellowship and practice rheumatology, with a focus on clinical research.

David Benderson, MD, is an ophthalmologist with Valley Health System in Ridgewood, N.J.