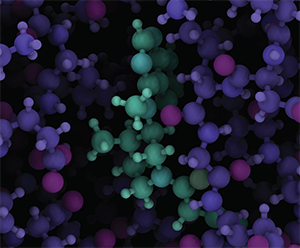 This shows the janus kinase 1 protein, which is part of the JAK-STAT signalling pathway and a drug target.
molekuul_be/shutterstock.com

LONDON—Kinase inhibitors’ profile in the world of rheumatic disease therapy is growing, and they are probably going to play an even larger and more central role as time goes on, experts said at the Annual Congress of the European League Against Rheumatism (EULAR) 2016.

But Gary S. Firestein, MD, director of the Clinical and Translational Research Institute at the University of California San Diego, said it’s important to learn from the recent past in kinase-inhibitor research and the failed attempts to develop some compounds, such as spleen tyrosine kinase (Syk) and p38 MAP kinase inhibitors.

With fostamatinib, studied in OSKIRA-4, there was less efficacy seen in Phase 3 than in earlier phases, and it became clear that hypertension and liver toxicity were problems.1 MK8457 showed some efficacy, but was discontinued due to serious infections and mortality.

Plus, Dr. Firestein noted, neither one of those drugs appeared to be effective in patients who were inadequate responders to TNF inhibitors. That, he said, “probably tells us about, in part, how TNF inhibitors work.” It’s more likely in series with Syk-inhibitors, not in parallel.

Janus kinase (JAK) inhibitors, the class of drugs that inhibits enzymes that are important in the signaling involved in immunity, are now in wide development. Twenty are now in the pipeline, with varying selectivity. Tofacitinib works on JAK 1 and 3, and to a lesser extent, JAK2. Decernotinib is mainly a JAK3 inhibitor but has some activity on the other JAKs. Baricitinib is a JAK 1 and 2 inhibitor, and filgotinib inhibits JAK 1.

Because the inhibition profiles all vary, using JAK inhibitors presents a challenge, but also a chance for better tailoring to a particular disease, Dr. Firestein said.

“These are degrees of selectivity, and they are not absolute,” he said. “The selection of which target you use and what profile you want for a particular indication might depend on the pathogenesis of the disease.”

“If it’s so clean and so selective that it is ineffective, then it is not a particularly good therapy,” he said. “Toxicity can be managed. Lack of efficacy cannot.”

Iain McInnes, MD, PhD, director of the Research Institute for Infection, Immunity and Inflammation at the University of Glasgow, described work being done at his center to gather immunological data that can be used to tailor treatment.