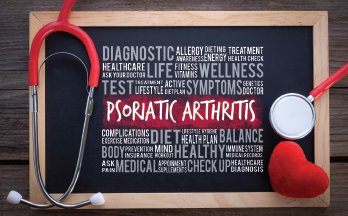 CHICAGO—As Eric Ruderman, MD, professor of medicine in rheumatology at Northwestern University Feinberg School of Medicine in Chicago, began his talk on psoriatic arthritis treatment at the ACR State-of-the-Art Clinical Symposium in April, he marveled a bit at how much there was to cover. Drugs gaining prominence in the treatment of rheumatoid arthritis and dermatological diseases have begun to carry over into psoriatic arthritis (PsA) research, where many have proved effective.

“Just a year ago, this talk would have had a lot less involved,” he said.

Biologics are being assessed in PsA at a rapid rate—some with persuasive data, some in small but tantalizing samples, Dr. Ruderman said. As new therapies undergo testing, he said, it’s important to consider how they affect the array of disease manifestations.

This drug—which targets cyclic adenosine monophosphate (cAMP), a regulator of several key immune pathways—works for enthesitis and dactylitis, “[a]nd the drug works quickly. We’re used to that with these targeted small molecules,” Dr. Ruderman said. Effects were seen within two to four weeks.1

He advised clinicians not to misinterpret the drug’s ACR 20% score (ACR20) response rate of 40%. “One thinks, ‘Well, that’s not so good.’… Be careful about assuming that means this drug works less well in the people in whom it works. I think what it really means is, this drug works in fewer people. … The people who respond, some of them actually respond pretty well.”

Importantly, he said, “you’re not seeing the immunosuppressive effects [with apremilast] that raise concern for infections [that] we see with some of the biologic agents we’ve been concerned about.”

More data are needed to sort through what can be confusing options, Dr. Ruderman said. ‘We need good comparative efficacy studies.’

This JAK1 and JAK3 inhibitor has been the subject of two PsA trials in the last year, and it was recently approved for PsA. “The tofacitinib response was in the same order of magnitude as we’re used to seeing with adalimumab” among inadequate responders to conventional disease-modifying anti-rheumatic drugs (DMARDs), he said.2

This therapy, which binds CD80 and CD86, produced a “modest” ACR20 response rate of 40%, but it was still superior to placebo and is another option for patients who fail earlier treatments. The response on skin was not impressive, Dr. Ruderman said.