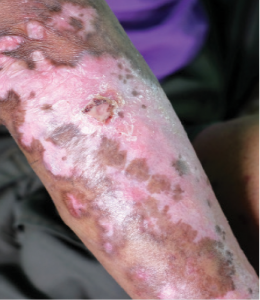 Scleroderma, or systemic sclerosis (SSc), is an autoimmune disease characterized by vasculopathy and fibrosis. Although relatively rare, with a prevalence in North America of approximately 300 per 1 million people, SSc is associated with significant morbidity and high rates of mortality.1 Patients with scleroderma have four times greater mortality than age- and sex-matched controls, with the majority of deaths related to interstitial lung disease (ILD) and pulmonary hypertension (PH).2 Predicting disease course at baseline is, therefore, of great importance, with implications for the choice of therapy. In 2013, the American College of Rheumatology (ACR) and the European League Against Rheumatism (EULAR) developed new classification criteria for SSc.3 These criteria allow for the inclusion of patients with early manifestations of the disease, such as puffy fingers, Raynaud’s phenomenon, nailfold capillary changes and specific auto-antibodies.

Identification of patients in the very early stages of disease is useful in helping establish care with a rheumatologist at a specialized center and for the implementation of treatment at earlier stages.

Historically, the pathogenesis of scleroderma has been poorly understood, but advances in recent years have shed light on some of the molecular and cellular pathways involved in the disease. Although not fully understood, the initial insult is thought to be vascular in nature, with injury to the vascular endothelial cells.

Damage to the endothelium and platelet aggregation result in the release of reactive oxygen species (ROS) and vasoactive mediators, such as thrombin, thromboxane and endothelin-1 (see Figure 1). Activation of the immune system leads to the generation of inflammatory cytokines and growth factors.

The central mediator of SSc fibrosis is the pleotropic cytokine, transforming growth factor-β (TGF-β). At baseline, TGF-β is in a latent form and must be activated by αv integrins. Active TGF-β then stimulates fibroblasts to proliferate and convert to myofibroblasts, which are responsible for laying down the extracellular matrix (ECM). Interleukin 6 (IL-6) is also secreted by activated immune cells and plays a role in fibroblast accumulation. Previous data suggest IL-6 levels are increased in skin and serum of patients with SSc and that elevated IL-6 levels predict severity of skin involvement in SSc.4

The bioactive lipid mediators, lyso­phosphatidic acid (LPA) and sphingo­sine-1-phosphate (S1P), are also implicated in SSc pathogenesis. Selective deletion of the LPA1 receptor in mouse models of fibrosis leads to a marked decrease in both lung and skin fibrosis.5,6 The interplay of these mediators leads to progressive ECM accumulation and structural remodeling, which causes further activation of fibroblasts and results in the progression of fibrosis.