You are here: Home / Articles / The Rheumatologist as Detective
Print-Friendly Version / Save PDF

My pen hovered over the pulse steroid order. Sign it, notify pharmacy, get it hung, hope for a response. I signed the order. A simple question came to mind. It came from, where? Why not Whipple’s disease? Momentarily, I could recall almost nothing about Whipple’s disease. Then, I seemed to remember, hadn’t I seen it on an extended list of rare causes of diarrhea and inflammatory arthritis? I crossed the order off, closed the chart, and jogged upstairs to the library.

Cracking open a rheumatology text, I reviewed what little is known about the disease. At the time the text was written, I flipped back to the inside cover, as of 1994, there were only 300 or so cases reported in the world’s literature. I learned that Whipple’s disease is an infection that originates in the small bowel. An extraordinarily fastidious organism, Tropheryma whipplei, can’t be cultured from stool samples. It can’t be grown from the blood. As yet, there was no antibody test to definitively confirm the diagnosis. But it can be seen on microscopy, I read on, if the proper stain, a PAS stain (Periodic acid-Schiff), is applied to the biopsy material. Over time, in untreated cases, the infection spreads inexorably from the GI tract to adjacent lymph nodes, and, once established, it slowly overwhelms the immune system and escapes into the general circulation. Arthritis, sometimes mimicking rheumatoid arthritis, may be present. Untreated, the disease is usually fatal. 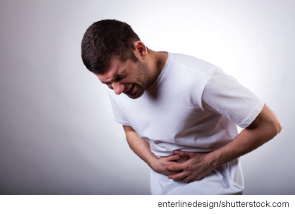 In untreated cases of Whipple’s disease, the infection spreads from the GI tract to eventually overwhelm the immune system.

My eyes settled on the last paragraph: The disease may be more common in workers exposed to manure or raw sewage. Treatment with corticosteroids is generally ineffective. Treatment with the antibiotic Bactrim is usually curative.

I closed the text and called pathology. No, the biopsy hadn’t been PAS stained. Yes, they could reprocess additional lymph tissue and stain the samples with PAS. The slides should be ready tomorrow. For the first time in seven months, I felt confident in my opinion. The shoes fit. It had to be Whipple’s disease.

There was one small problem. Consulting physicians don’t usually over-ride orders, particularly antibiotic orders, written by the admitting attending doctor. Leon Woodle was slipping away on a cocktail of antibiotics, appropriate broad-spectrum antibiotics, effective against a host of infections, but not against this particular infection, not against Tropheryma whipplei. The attending on the case was reluctant to discontinue the current antibiotics. I had no direct evidence this was Whipple’s and was reminded that the current combination of IV antibiotics was usually superior to the older drug Bactrim for a wide variety of infections.