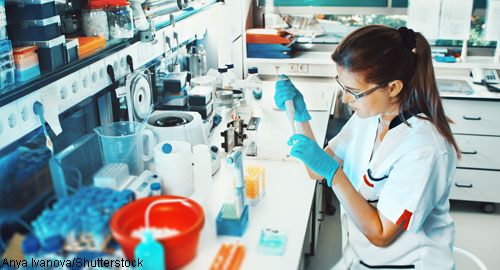 Although research has found aging bones lose their ability to mechanoadapt, it has been difficult to fully understand the mechanism behind this decline. It is likely the decline reflects changes in the strain environment, as well as changes in cellular behavior, that occur as the organism ages. But osteocytes appear to be central orchestrators of bone mechanoadaptation and signaling through osteocytic Wynt may be essential in the regionalized anabolic load response of bones. Moreover, previous studies have found age-related decline in mechanoadaptation can be restored via surgical neurectomy, which suggests it may be possible to rescue mechanoadaptation.

A new study in mice demonstrates that certain old bones respond to load when the load is of sufficient magnitude. Moreover, the results suggest the bones’ age-related adaptation failure may result from insufficient mechanical stimulus that trigger mechanonadaption. Behzad Javaheri, PhD, postdoctoral research fellow at the Royal Veterinary College, London, and colleagues reported their findings on April 27 in Scientific Reports.1

“Using our loading model along with analysis of responses in a few selected regions—not entire tibia—we previously reported that loading induces significant magnitude-related increases in bone accrual in growing mice, which become somewhat diminished [still present] in mature mice,” write the authors in their discussion. They report that, although in general aged mice do not respond to loading, it was possible to non-invasively prime cortical bone mechanoadaptation in the mice via regional distribution and induction of osteogenic strains. The key factor was a loading regime that did not emphasize force.

“Our analysis of the entire tibia finds that short-term priming in aged mice with loads high enough to generate maximum strains matching those capable of driving osteogenesis in younger mice, termed surplus high-load herein, can partially restore cortical but not trabecular mechanoadaptive response in aged bone,” write the authors. “We confirm previous studies describing a failure of mechanoadaptation in specific cortical regions and extend them by showing they are absent along the entire length of the aged tibia cortex. By characterizing tibial responses to applied load across a range of ages, we show that transient peak-strain matching partially recovers mechanoadaptive responses in aged bone.”

The investigators were unable to say for certain whether aged bones had lost their mechanical responsiveness due to failure of the osteocytes to sense load, a failure of the osteoblasts to lay down new bone or an insufficient mechanical stimulus to trigger a response. They acknowledge that multiple factors may contribute to the documented mechanoadaptive response. These factors include load magnitude, frequency, rate, duration and inclusion of rest periods. They also say, “By examining bones collected immediately after the priming stimulus, we find that one consequence is a localized decrease in osteocyte SCLEROSTIN expression, which supports a local sensitivity to the mechanical stimulus and the contribution of osteocytes to mechanoadaptation.”