You are here: Home / Articles / Why Oral Corticosteroids Should Not be Used in Patients with Rheumatoid Arthritis
Print-Friendly Version / Save PDF 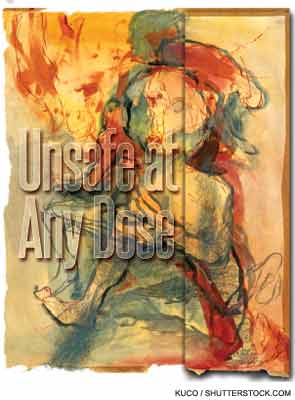 There are two main reasons for arguing against the use of oral steroids in patients with rheumatoid arthritis (RA):

Why Are Corticosteroids Used?

Recent studies initially by Kirwan and subsequently by several other groups have shown that when initiated alongside disease modifying antirheumatic drug (DMARD) therapy, steroids are associated with a decrease in radiologic progression.1-4 In one longer study, the difference at four years, while statistically significant, was hardly clinically important—a mere four Sharp score units.2 Nevertheless, a DMARD effect exists. In the most recent study, patients with less than one year of RA were treated with a tight control strategy using methotrexate along with 10 mg of prednisone daily (“low dose”).3 At the study completion at the end of two years, there was no observed difference in median Sharp scores, but the percentage of patients with new erosions was statistically different; 78% of those on prednisone and methotrexate were still erosion free compared to 67% on methotrexate alone. The clinical benefit (calculated by DAS28) that was very obvious in the first months of the trial had largely disappeared by the end of the first year of treatment. This is a recurrent theme of studies that use prednisone to treat RA and, despite the radiologic difference observed at two years, Kirwan noted that the clinical effect “did not persist into the second year.”

Thus, the rationale for persistent long-term clinical benefit does not seem to hold up when formally tested in a controlled trial rather than using what Dr. Ted Pincus has coined “eminence-based” medicine.

There are no longer-term data beyond four years to say whether the mean four units of Sharp score difference at four years will increase over the next 30 years or remain unchanged. Data from the Better Anti-Rheumatic Farmacotherapy (BARFOT) study observed no change in Sharp scores between Years 1 and 4.2

Why Corticosteroids Shouldn’t Be Used

In contrast, we have clear-cut long-term toxicity data to balance against this minor radiologic difference. In 1983, Scott published a 20-year follow-up of RA patients who were receiving steroids along with DMARDs such as gold.5 Many of the patients had become disabled and several had died, with some of deaths thought to be steroid related. In ground-breaking studies, Pincus emphasized the increased mortalities associated with RA and likened it to triple-vessel coronary artery disease or lymphoma.6 He also showed that the mortality rate was increased in those patients receiving steroids versus those who were not (but this is less often emphasized). A study of patients with early RA followed over 15 years found that 39% of those patients who died had been on steroids compared to just 3% of those who were alive.7