Commitment to quality patient care has been a constant since Dr. Sergent’s years as a medical student. Bevra Hahn, MD, division chief and professor of rheumatology at the David Geffen School of Medicine of the University of California, Los Angeles, met Dr. Sergent when he was an intern at Johns Hopkins, where she was doing her rheumatology fellowship under Lawrence E. Shulman, MD, PhD. “John was really quite outstanding in several ways. First of all, he’s a very pleasant and interactive guy, so you want to talk to him. Secondly, he’s really brilliant and had excellent ideas and probing questions.”

Later, during his fellowship, Dr. Sergent questioned the propensity of rheumatologists to use high-dose intravenous methylprednisolone in acutely ill rheumatic patients, a treatment which is still popular, says Dr. Hahn. Dr. Sergent reported on a series of patients with central nervous system lupus given high-dose steroids, concluding that the adverse side effects with continued use outweighed potential benefits.1 Dr. Hahn admired the fact that Dr. Sergent proposed a timeline for curtailing that therapy if efficacy could not be shown. “Even at this time in history,” she notes, “we all tend to make a plan, and if we’re not getting a response, to keep trying it a bit longer. That’s the kind of organizational, creative thinking that John was clearly capable of.” 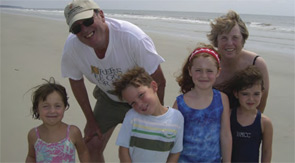 In addition to his leadership in the department of medicine, Dr. Sergent has helped steer rheumatology through some difficult waters. While the initial division of the ACR (then called the American Rheumatism Association) and the Arthritis Foundation began in 1986, in reality the separation of the two organizations was “more of a process than a single event,” notes Dr. Sergent.2 During his ACR Presidency (1992–1993), the relationship was still being untangled—and it was a “painful process,” recalls Dr. Hahn. She was among those rheumatologists working on the separation, at a time when the new ACR worried about its ability to fund its missions. She gives Dr. Sergent substantial credit for helping to lead the organization through those rocky times and for helping to avoid the common history of other colleges of professionals, which sometimes splinter into separate enclaves of academics, clinicians, and researchers. Both she and Dr. Sergent agree that ACR is much stronger as an inclusive and unified organization.