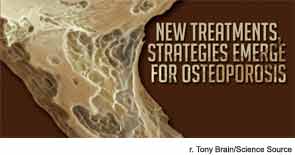 Colored scanning electron micrograph (SEM) of an osteoporotic femur head. In places, the surface of the bone has been eroded to reveal the underlying tissue.

WASHINGTON, D.C.—Using bisphosphonates to prevent the loss of bone mass associated with rheumatic conditions can require a deft touch—and even some guesswork—because it is unclear how long they should be used. The longer they’re used, the more likely it is they might cause harm, an expert said during a session titled, “Osteoporosis: From Bisphosphonates and Beyond,” here at the 2012 ACR/ARHP Annual Meeting, held November 9–14. [Editor’s Note: This session was recorded and is available via ACR SessionSelect at www.rheumatology.org.]

This is an area that calls for caution, Chad Deal, MD, head of the Center for Osteoporosis and Metabolic Bone Disease at the Cleveland Clinic, said during the session about the latest in treatment for, and management of, osteoporosis.

“It’s pretty clear from the data that these atypical [femur] fractures are increased with increasing use,” Dr. Deal said. One study found that the number of atypical femur fractures stood at 113 per 100,000 patients per year at about the eighth year of taking the drugs.1

When to Stop Bisphosphonates

The U.S. Food and Drug Administration (FDA) has been vague when it comes to how long bisphosphonates should be used, but suggests there might be no advantage in continuing treatment after five years.

The evidence, though, shows there might be benefit to taking the drugs longer. For instance, people taking alendronate longer than five years showed more lumbar spine bone mineral density improvements after the fifth year than those who switched to placebo at five years.3

One study by Dieb and Watts that has been submitted for publication suggests grouping patients into mild, moderate, and high-risk fracture categories based on their history of fracture, clinical risk factors, and fracture risk scores (T scores and FRAX), with the higher risk groups getting longer duration of treatment.

Other Drugs to Prevent Bone Loss

Nelson Watts, MD, director of the Mercy Health Osteoporosis and Bone Health Services in Cincinnati, said that denosumab, a receptor activator of nuclear factor κB ligand (RANKL)–inhibitor approved in 2010 for women with postmenopausal osteoporosis who are at high risk of fracture, performs well.

But the problems have not grown worse in the three-year extension of manufacturer Amgen’s study of the drug, and two of the three endocarditis reports were fleeting cases, Dr. Watts said.

“I think that the cellulitis and endocarditis are simply random events that are likely to be different in low numbers of patients when you have a large clinical trial,” Dr. Watts said.

As far as more novel agents, Dr. Watts pointed to the cathepsin-K inhibitor odanacatib, which is in a phase III trial. Its hallmark, he said, is that it doesn’t appear to interfere with the “crosstalk” between the cells that can lead to bone resorption. Trials have shown good results with regard to bone density and a bone resorption pattern that varies over time, according to data supplied to Dr. Watts by manufacturer Merck.

Antisclerostin antibody, a blocker of sclerostin that is produced by osteocytes and has a key role in the cessation of bone formation, has also shown promising early results.4

“The inhibition of cathepsin-K and sclerostin offer the potential for novel effects” that are “more truly antiresorptive and anabolic,” Dr. Watts said.

Dr. Watts was an investigator on denosumab’s trials by manufacturer Amgen and on odanacatib’s trials by Merck.

Kenneth Saag, MD, MSc, professor of medicine in the division of clinical immunology and rheumatology at the University of Alabama at Birmingham, examined several traditional topics—like the role of calcium and Vitamin D and measuring fracture risk—in the context of the latest information.

Calcium and vitamin D have their benefits in maintaining and improving bone density, but they also have drawbacks. One meta-analysis found a 30% increase in risk of myocardial infarction related to calcium.5 But, Dr. Saag cautioned that no meta-analysis looking at this link had cardiovascular events as a primary outcome.

Another meta-analysis found that calcium does not increase atherosclerosis, hospitalizations, or death outcomes.6

For vitamin D intake, doses that won’t be adequate and doses that are too high, should be avoided, Dr. Saag said. Generally, 800 to 2,000 IU/d is a good range for those at risk for fractures or falls, he said. “Overuse of calcium and vitamin D supplements may be deleterious.”

Dr. Saag said that as new ways of gauging fracture risk emerge, the attention is shifting away from looking at relative risk, as the T score does, to absolute risk, as FRAX and other scores do.

FRAX, he said, has its benefits, but is geared toward treatment-naive patients and might lead to overestimations or underestimations of risk. If FRAX scores are used to determine treatment thresholds, without clinical trial data supporting such therapy, that might open the door to treating a pool of people who might not otherwise exist as a patient group, Dr. Saag added.

As new therapies are developed, the focus should be “not so much about the significant gain in bone mineral density, but about significant loss in [bone mineral density],” Dr. Saag said. “That ought to be what we’re checking for, and that should motivate our thinking about what to do next.” the rheumatologist

Thomas Collins is a freelance medical journalist based in Florida.