In a follow-up study spanning more than a decade, Zeft et al examined short-term exposure to small particulate matter (PM2.5) based on central daily air monitoring in a case-crossover design in 250 patients living in five metropolitan areas in the U.S. and Canada. No significant associations between PM2.5 concentrations and risk of systemic JIA were observed; however, a trend toward higher risk in younger children (younger than 5.5 years old) was again observed, but was not significant.43

In other systemic autoimmune diseases, a case-control study of pregnancy exposures found that the highest tertile of carbon monoxide exposure during the third trimester of pregnancy, based on daily air pollution monitoring stations located throughout the city of São Paulo, Brazil, was a risk factor for JDM.39 However, in a multicenter North American clinics cohort of more than 3,000 patients, there was no increased risk of Kawasaki disease associated with short-term PM2.5 air particulate exposure based on daily central monitoring of seven metropolitan cities.44

Two Brazilian studies found effects of air pollution on the disease activity of systemic autoimmune diseases. One study examined the effect of air pollutants, as measured by local monitoring stations, on the fluctuation of hospital admissions of pediatric systemic rheumatic diseases, including JIA, JDM, lupus, vasculitides and systemic sclerosis. That study found a weak, but significant, relationship between sulfur dioxide and increased hospital admissions 14–17 days after exposure was detected. No relationship was found with other air pollutants, such as PM10, ozone, nitrogen peroxide and carbon monoxide.45 In a second study, air pollutants, including carbon monoxide, nitrogen dioxide and PM10, were associated with higher activity in pediatric lupus, as measured by SLE Disease Activity Index scores >8, approximately two weeks after exposure.46 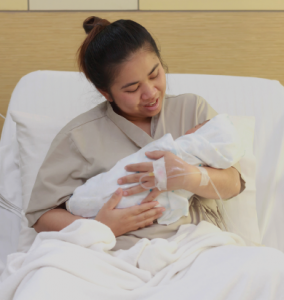 Breastfeeding may decrease the risk and severity of JIA.

A higher frequency of psychosocial stressors at symptom onset or experienced at the time of diagnosis has been reported in patients with JIA vs. healthy controls. Stressors included parental separation, an ill family member and problems getting along with others.47 Exposure to high levels of ultra­violet radiation in the month before symptom onset based on residential location was associated with higher odds of having JDM compared to juvenile polymyositis (which lacks the characteristic skin rashes) and with the anti-p155/140 (TIF-1) myositis autoantibody (an autoantibody group more associated with photosensitive skin rashes).48

Although the field is in its infancy and conflicting results exist, current studies suggest that several environmental factors affect the risk of JIA and other systemic pediatric autoimmune diseases. Well-conducted and sufficiently powered investigations have found a role for early life infections and antimicrobial use as risk factors for JIA, which challenge the hygiene hypothesis. Premature or post-term birth, fewer siblings in the family, maternal smoking during pregnancy and air pollution are possible risk factors for JIA, but they need confirmation and further examination of JIA subtypes.