Immune checkpoint inhibitors (ICIs) are increasingly used to treat a variety of malignancies, leading to better cancer treatment outcomes and patient survival. However, the emergence of autoimmunity has been a major adverse event resulting from ICI use. Below, we describe a patient who experienced a flare of preexisting psoriasis and new-onset severe psoriatic arthritis after receiving nivolumab for treatment of his non-small cell lung carcinoma.

A 61-year-old male presented at the rheumatology clinic complaining of new-onset joint pain and a worsening skin rash. The patient’s past medical history was significant for stage 4 non-small cell lung carcinoma diagnosed in November 2015. He was initially treated with carboplatin, gemcitabine and necitumumab, but he experienced tumor progression, necessitating discontinuation of that therapy. Nivolumab was started in September 2016. Eleven months following treatment initiation with nivolumab, the patient developed a flare of skin psoriasis and the onset of swelling and pain in multiple joints (see Figure 1).

He was referred to rheumatology, and on examination, synovitis was noted in the proximal interphalangeal and metacarpophalangeal joints as well as in his wrists and elbows. He had limited range of motion in his shoulders and hips. Extensive psoriatic plaques covered his upper and lower extremities, his abdomen and his frontal and temporal hairlines.

Nivolumab was discontinued by his oncologist one month after onset of his joint swelling and worsening psoriasis. The patient was started on 20 mg prednisone daily at his rheumatology evaluation. At follow-up, he reported 30–40% improvement in symptoms, but he continued to suffer from psoriasis, as well as pain and swelling in multiple joints.

Nivolumab was discontinued by his oncologist one month after onset of his joint swelling & worsening psoriasis. 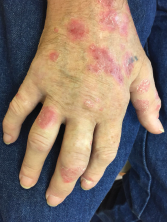 Eleven months following treatment initiation with nivolumab, a 61-year-old male developed a flare of skin psoriasis, as well as swelling and pain in multiple joints.