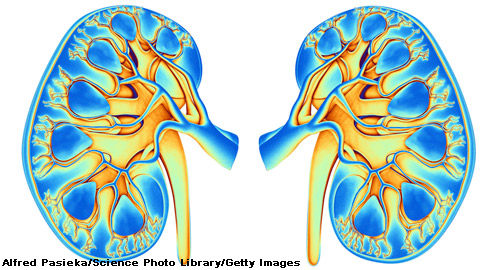 Previous studies have found that patients with gout who have lower serum uric acid (SUA) levels are less likely to experience a cardiometabolic event than those with higher SUA levels. New research suggests that these patients also appear to have a reduced risk of renal function decline. This reduced risk has potential clinical implications, because many patients with gout eventually develop chronic kidney disease Stage 3 or higher. Although Rishi J. Desai, PhD, instructor of medicine at Brigham and Women’s Hospital & Harvard Medical School in Boston, and colleagues found an association between SUA and renal function decline, they surprisingly found no association between reduction in SUA and diabetes mellitus or cardiovascular disease (CVD). The authors published their results online Feb. 28 in PLoS ONE.1

The large observational study consisted of 26,341 patients with gout who had SUA measurements of 6.8 mg/dL or higher. The median baseline SUA in the cohort was 8.6 mg/dL. The average age of the patients was 62 years and 75% were men. The investigators did not include patient race, weight, blood pressure or smoking intensity in their analysis.

Using these data, the investigators calculated an adjusted hazard ratio (HR) for a 3 mg/dL reduction in SUA. They chose this number because, on average, it corresponded to achieving the target level of less than 6 mg/dL. The adjusted HR was 1.04 (0.92–1.17) for diabetes mellitus, 1.07 (0.89–1.29) for CVD and 0.85 (0.78–0.92) for renal function decline. When the researchers performed a sensitivity analysis among patients not on angiotensin-converting enzyme inhibitors or angiotensin II receptor blockers at baseline, they found the association between 3 mg/dL reduction in SUA and renal function decline was consistent with the primary analysis (adjusted HR of 0.82, 0.72–0.94). When the investigators performed a secondary analysis during which cumulative changes in SUA during follow-up were modeled as restricted cubic splines, they found that reductions in SUA continued to be associated with a significant decrease in risk for renal function decline (HR for reduction by 3 mg/dL was 0.83, 0.78–0.89).