You are here: Home / Articles / A Stiff Man: A Case Study in Ankylosing Spondylitis
Print-Friendly Version / Save PDF

I watched the old man, his back painfully bent, shuffle toward the scale. A blocky rigidity draped over him. His feet seemed stuck to the floor. His head hung heavily over his chest. Observing him from the end of the hallway, instead of a face, I saw only a mound of shaggy, matted hair.

Pausing in front of the scale, he leaned his walking stick against an adjacent chair. The stick was more or less straight, the bark stripped, the underlying wood sanded to a marbled brown. As he lifted a foot to step onto the scale, the medical assistant gently held the crook of an elbow. His loose jeans drooped over a pair of bony hips. Beneath a gory Zombie T-shirt (Zombies Are People Too!!) his bony shoulder blades and muscle-wasted arms suggested, what? Cancer? Malnutrition?

The old man’s hand brushed against the chair and the walking stick slid off, rattling onto the linoleum. The medical assistant whispered into an ear, and he dutifully extended both arms and grabbed the stem of the scale while she picked up the cane. He swayed dangerously to the right, then the left, before Joanne, my office nurse, swiveled out of her cubicle and grabbed his waist. She and the medical assistant backed him off the scale. The three of them disappeared into Room 3.

The intake form Mr. N. filled out was largely blank. On the second page, where patients are asked to describe their symptoms, Mr. N. had scribbled, “Every morning, I wake up, and my back and knees feel like crap.” Under medications he wrote, “Ibuprofen is useless. Hydrocodone helps a little.”

Well, that’s a start, I thought. As I closed the chart, I was not under an illusion that I could add much to Mr. N.’s care. If his knees are bone against bone on X-ray, perhaps I can convince him to consider knee replacement. Physical therapy or soft tissue manipulation could help, and there’s always the free city pool program at the Riverton middle school. Even if he’s not a candidate for surgery, building strength in the back and lower legs can help reduce pain and improve function. A back brace? Hmm … I’ve had mixed results with that. There’s only so much you can do for a bad back. 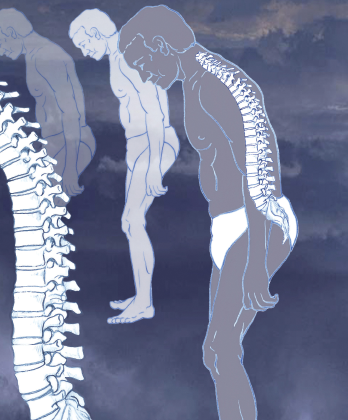 An illustration of ankylosing spondylitis, which commonly affects the joints between the spinal bones and the sacroiliac joints, which link the spine to the pelvis. The joints become painful and stiff. In severe cases, the vertebrae may fuse together completely. The condition is treated with painkillers and regular exercise.
Dominique Duval/Science Source