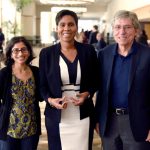 Editor’s notes: A memorial service for Nadia is being planned for Jan. 16, 2019, from 4:30-6:00 p.m. at Johns Hopkins Bayview Asthma and Allergy Center, Richard A. Grossi Auditorium, 5301 Hopkins Bayview Circle, Baltimore.

To honor her life and the impact she made on the Division of Rheumatology, Johns Hopkins is establishing the Dr. Nadia D. Morgan Memorial Fund. Through this endowment, a lectureship will be held to focus on the impact of African ancestry on the manifestations and course of the rheumatic diseases, and to fund support for fellows to attend national meetings in their areas of interest.  Contribute online here.

In 1993, Tom Hanks received the Academy Award for his work on Philadelphia, a movie about a lawyer who was fired from his workplace after he was diagnosed with AIDS. In his acceptance speech, Mr. Hanks lamented that many of the people who helped bring the movie to fruition did not live to see him accept the award, having been taken from us far too soon. “And there lies my dilemma here tonight,” he said. “I know that my work … is magnified by the fact that the streets of heaven are too crowded with angels.”

On Dec. 15, 2018, Nadia Dominique Morgan, MBBS, was killed in a car accident. She was an instructor in medicine at the Johns Hopkins University School of Medicine, Baltimore, and a faculty member of the Johns Hopkins Scleroderma Center.

Nadia attended medical school at the University of the West Indies in Kingston Jamaica, where she received both medical and surgical honors.

She was recruited by the State University of New York Downstate Medical Center, where she completed her training in internal medicine and subsequently served as chief resident. During her chief residency, the Eastern Seaboard was hit by Hurricane Sandy, which forced many New York Hospitals to close. As chief resident, Dr. Morgan was responsible for triaging and accommodating many of the patients who were displaced by the storm.

Dr. Morgan was then recruited by Johns Hopkins to complete her fellowship training in rheumatology, where she developed a strong interest in the impact of race on the rheumatic disease. She was an investigator for a multi-center cohort GRASP, which is the largest study ever conducted of African Americans with scleroderma. In November 2016, she received the Distinguished Fellow Award from the ACR, which is the highest honor offered by the ACR to a trainee. In 2017, she received a Scientist Development Award from the Rheumatology Research Foundation, in support of her work examining the role of IL-13 in the pathogenesis of lung disease among patients with scleroderma. In 2018, the Rheumatology Research Foundation also awarded her a Career Development Award, in support of her work in this area.

She was in her third year as a member of the ACR’s Standing Committee on Patient Registries; she was the first Afro-Caribbean woman to serve on this committee. She has also served on the ACR’s Fellows-in-Training Subcommittee’s roundtables on obtaining independent grant funding. In 2017, she was appointed to Alpha Omega Alpha, in recognition of her tremendous accomplishments, and she was about to be promoted to the position of assistant professor at Johns Hopkins University.

In 2016, Dr. Morgan became a U.S. citizen. Despite this, she remained tremendously proud of her Jamaican heritage. She often quoted the Jamaican motto, “out of many, one.” She used this as a way of reminding us of her Jamaican outlook, that the aspects of life that drew us together were far more important than the quirks that drew us apart. She had a fierce, independent streak and a drive to succeed, which was softened by her tremendous compassion for others, which she shared with patients and colleagues alike. She had a magnetic personality and a commanding presence; you could instantly tell when she walked into a room. Like the ginger beer she liked to drink, she was sweetness, tempered with a bit of spice. She is irreplaceable. She will be missed.