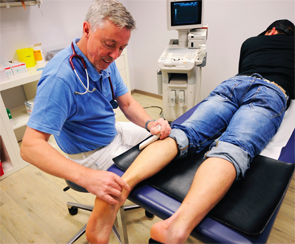 A doctor examines a patient’s Achilles tendon, named for the Greek demigod slain by an arrow in his heel.
Image Credit: Klaus Rose / Science Source

“Love is the bone and sinew of my curse.”
—Sylvia Plath

Here’s the problem: No one grows up wanting to seek the cure for bursitis—or tendonitis or just about any of the other seemingly mundane maladies afflicting our body’s scaffolding. Meniscal tears, fasciitis, tendinopathies—the list is endless. Chances are, your college essay never touched on the curse of plantar fasciitis and how you planned to fix it. Unless you have experienced the misery caused by one of these highly annoying ailments, you may not be interested in spending much time pondering their pathogenesis.

In truth, these forms of connective tissue disorders lack the intellectual heft, societal concern and financial support afforded to more prominent conditions, such as AIDS, Alzheimer’s disease and cancer. They are commonly viewed as nuisances wrought by overuse, whether occupational or athletic, or as telltale signs hinting that our bodies are aging less than gracefully. Sometimes, through no fault of their own, tendons and bursae become trapped in the inflammatory crossfire of an overactive immune system. Until recently, these sinewy, fibrous structures were considered the innocent bystanders, lacking the requisite antigenic credentials necessary to serve as the true targets of immunity’s ire.

The importance of having healthy tendons is obvious. Without them, motor activities become challenging, if not impossible to perform. This reality was well understood by our ancestors, who learned to cut hoof tendons as a way of domesticating animals. The procedure efficiently restricted the animals’ movement without killing them. For example, Siberian rock drawings dating to 3000 BC are seen depicting hunters performing a tenotomy on deer.1 The cruel side of human nature understood the power of performing similar procedures on their adversaries. During the days of the Roman Empire, captured generals were forced to sever their own flexor and adductor pollicis tendons as a way of rendering them incapable of swordsmanship.

Various mythologies are rife with tales of tendons. In Greek mythology, the Amazons were a nation of female warriors whose principal city, Scythia, was located on the southern shore of the Black Sea. They were expert riders and archers who also used spears and long battle-axes. Only those who had killed in battle were allowed to mate, and only during two months of the spring. Male children and captives were crippled and used as slaves. The reason for crippling the males was to tame them and to make them better for breeding. “The lame best perform the act of love,” declared Antianara, a queen of the Amazons.2