You are here: Home / Articles / Myositis Autoantibodies as Biomarkers
Print-Friendly Version / Save PDF 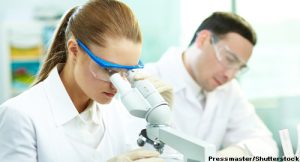 Additional research has revealed two other antibodies, anti-KU and anti-U1RNP, are associated with the cardiac involvement and interstitial lung disease (ILD) frequently seen in patients with myositis. These autoantibodies are also associated with a worse prognosis. Thus, the research on autoantibodies suggests they may be useful for diagnosing idiopathic inflammatory myopathy subtypes and possibly for tracking diseases.

A new study details the autoantibodies of patients with myositis and confirms that most patients do have them. Moreover, Zoe Betteridge, PhD, a researcher in the Department of Pharmacy and Pharmacology in the University of Bath, U.K., and colleagues found these antibodies can be used to identify distinct clinical subsets. They published their finding that myositis-specific autoantibodies are nearly always mutually exclusive online April 13 in the Journal of Autoimmunity.1

“We have shown autoantibodies specific [to] or associated with myositis, as identified by [protein immunoprecipitation], are present in the majority (61.5%) of patients of idiopathic inflammatory myopathies using four large combined cohorts of patients,” write the authors in their discussion. “Furthermore, myositis-specific autoantibodies and myositis-associated autoantibodies identify important clinical phenotypes beyond traditional subgroups of polymyositis/dermatomyositis. Moreover, the autoantibody negative group was different from the autoantibody positive in having less frequent extra-muscular manifestations.”

Although the majority of autoantibody positive patients (84.7%) had a sole specificity, 15.3% had autoantibodies targeting multiple autoantigens. The most frequently detected autoantibody was anti-Jo-1 (18.7%). However, the investigators identified an additional 21 specificities each found in 0.2–7.9% of patients.

The researchers used linear regression models on data from patients with a single autoantibody to determine the association between autoantibody subsets and clinical features. The most common antibody (anti-Jo-1) was associated with ILD, mechanic’s hands, Raynaud’s phenomenon and arthritis. The team confirmed anti-TIF1 (7.0%) and anti-Mi2 (5.4%) were associated with cancer. They also found anti-Mi-2 autoantibodies were not only strongly associated with an increased risk of dermatomyositis rash, but also mechanic’s hands, periungual erythema and dysphagia. Patients with anti-SRP (2.4%) had an increased risk of cardiac involvement, and ILD was strongly associated with the anti-RNA synthetases, such as anti-Jo-1, anti-MDA5 (1.3%) and anti-U1RNP/Sm (7.6%).