As a manifestation of hyperuricemia, inflammatory bullous lesions have rarely been described in the past century. A more classic presentation of hyperuricemia is acute inflammatory gouty arthritis, characterized by the deposition of monosodium urate crystals. Other complications of chronic untreated hyperuricemia may include polyarticular arthritis, tophus formation and possible chronic destructive lesions of the bone, leading to permanent disability. Cutaneous tophus formation is one possible manifestation of chronic hyperuricemia and can be associated with acute inflammatory changes, such as a gouty cellulitis and, rarely, bullous lesions.

An 87-year-old woman with a history of untreated polyarticular gout was admitted to the hospital due to acute pain in several joints, including both hands and her right foot, with spontaneous formation of new blister-like lesions on the hands. Her past medical history included treatment with torsemide for congestive heart failure from ischemic cardiomyopathy, coronary artery disease, type II diabetes mellitus, hyperlipidemia, hypertension, atrial fibrillation with embolic stroke and chronic normocytic anemia. She also had a history of previously untreated gouty episodes occurring over the previous eight years. 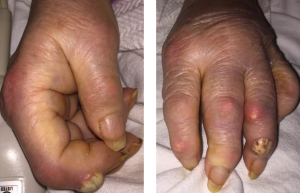 Upon presentation to the hospital, she was afebrile with normal vital signs. She had podagra of the right great toe, and synovitis of the MCPs of multiple joints of the hands, in an asymmetric fashion. She demonstrated multiple cutaneous tophi, as well as multiple warm, tender, erythematous tophaceous lesions overlying the distal interphalangeal (DIP) and proximal interphalangeal (PIP) joints. The patient confirmed that these tophi are typically not inflamed and have been present for several years. However, she had two new lesions overlying the right second DIP and left fourth DIP, which were exquisitely tender, and had a tense, bullous appearance and texture with a creamy, yellow-white discoloration overlying an erythematous base (see Figures 1A and B).

She had a white blood cell count of 22,200/µL, hemoglobin of 10.5 g/dL, platelet count of 688,000/µL. Her renal function was within normal limits, and her serum uric acid level was 12.5 mg/dL. Radiographic examination of the feet and hands (see Figure 2) showed multiple destructive, erosive lesions with overhanging edges, consistent with a chronic, erosive, gouty arthritis.