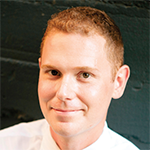 Background: Dr. Jeffries grew up on a cattle ranch in Oklahoma, attended state university and, at 33 years old, has carved out a pretty good gig for himself. Having spent a year working as a lab tech, he went on to earn his medical degree from Oklahoma University in 2010. He did his residency and completed his fellowship in the same place. His workweek is 75% research and 25% clinic, and he has no plans to move any time soon.

“I really enjoyed being in the research lab,” he says. “I was lucky enough to get hired by Amr Sawalha, MD, another previous ACR Distinguished Fellow [now at the University of Michigan]. I was the first lab tech that he hired when he got out of fellowship, which meant I had an extraordinarily broad exposure to laboratory techniques and scientific writing in a very supportive environment.”

A founding member of an international consortium and data repository for osteoarthritis epigenetic information, Dr. Jeffries was among the first to elucidate genome-wide DNA methylation matters in OA cartilage and recently investigated epigenetic alterations in OA subchondral bone. He is now focusing on the role of systemic inflammatory epigenetic changes in OA patients.

Q: What are your goals for your research lab?

A: My short-term goal is to find an easy—hopefully—blood-based biomarker that we can use to differentiate the knee OA patients who are going to rapidly progress from those that just kind of hang out for decades. If we’re going to have any hope of getting therapies that work, we need to design clinical trials that include the patients that are actually going to get worse in a few years. We have no biomarkers, so far. [Long term], we may uncover something else that is different about the immune system that we might be able to use to develop drugs in the future.

Q: What’s the most challenging part of your job right now?

A: Balancing the clinical stuff that I do with all the research responsibilities. Neither are exactly easy on their own, and the combination is sometimes daunting, but I wouldn’t have it any other way.

Q: What has the ACR meant to you and your career?

A: It’s meant a lot, but two things stand out. First, it has meant funding. I have received the ACR medical school and resident preceptorships, and I’m getting the fellowship award now. These sources of funding allowed me to pursue my own projects starting early and gave me a great foothold of preliminary data for later grant submissions. The second thing is the connections. I was fortunate to go to the ACR Rheumatology Research Workshop twice and several ACR/ARHP Annual Meetings, and met some key folks from the ACR and NIH. It has been a great experience having been exposed to high-level research early on. I have no doubt that that’s helped me get to where I am today.